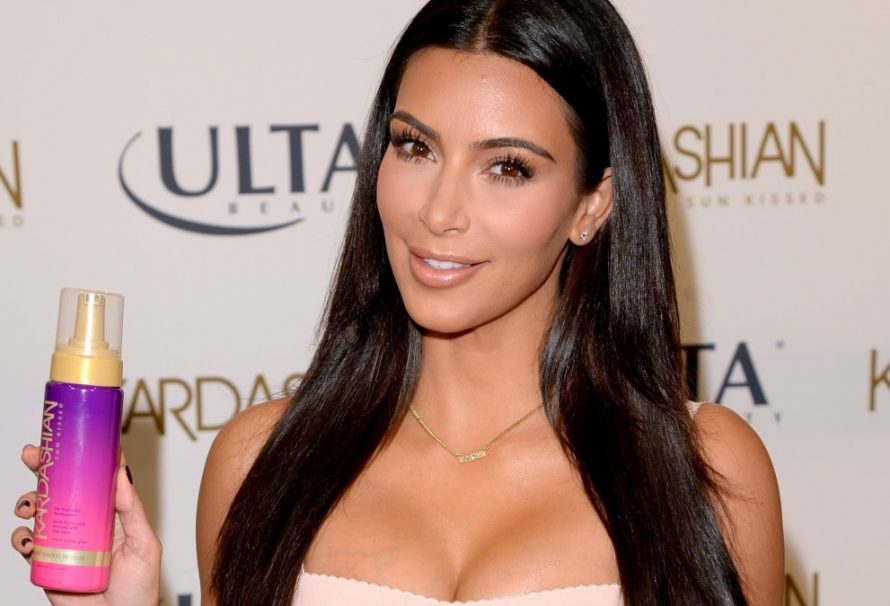 Welcome to Pop Culture Week! While you can always find us waxing poetic about the hefty overlap between fashion and pop culture, we’re dedicating the next five days to the subject of our favorite music, movies, TV, celebrities, books and theater, and how that all intersects with the fashion industry.

It may be difficult, from our hindsight-enhanced perch here in 2018, to recall a simpler time when the Kardashians were not the respected global influencers they are today, but rather run-of-the-mill celebrities hawking products via licensing deals. Take a moment to think back, if you will, to the years 2011 through 2015: “Keeping Up With the Kardashians” had already been on the air for years, and the Kardashian sisters were regular (if controversial) fixtures in the tabloids and on magazine covers. Kris Jenner had already begun leveraging her daughters’ snowballing fame and spinning it into somewhat of a machine, albeit not quite an empire — yet. But back then, it was the three sisters — Kim, Kourtney and Khloé — who were, together as a group, considered a burgeoning, marketable brand. You’d likely never find one of them starring on a reputable magazine cover alone; they were a packaged deal, a triumvirate of self-tanned reality TV stars who seemed well-suited to continue on in that exact lane.

At the time, it’s doubtful anyone in the beauty industry would have predicted that Kim would eventually be selling $10 million worth of perfume in a single day, or that the world would be debating just how “self-made” a billionaire Kylie Jenner actually is. Before the Kardashian-Jenner women became the beauty-industry-disrupting mega-forces they’re regarded as today, there were many other Kardashian beauty brands, products and tools — and not all of them were a hit.

Take Khroma Beauty, a makeup line from Kim, Khloé and Kourtney, which launched in 2012 — but barely lasted a year in stores. The brand was pulled from shelves when it was hit with multiple lawsuits for copyright infringement. First, a Los-Angeles-based beauty company called Chroma Beauty threatened a lawsuit; then Florida-headquartered company Kroma Beauty stepped in with their own suit for copyright infringement, seeking $10 million in damages for “theft” of its brand name.

In March of 2013, the case came before a U.S. District Court judge, who issued a preliminary injunction against Khroma Beauty, siding with Florida’s Kroma Makeup. Boldface, the licensing company that managed Khroma Beauty, appealed the decision, but the injunction was stayed upon appeal, officially forcing Khroma Beauty to re-name as Kardashian Beauty.

“Obviously the biggest problem for Khroma Beauty was its name, but another big struggle for the brand was probably the level of involvement from the sisters,” says a former employee of the Kardashian-Jenners who wishes to remain anonymous. “This was a licensing deal (whereas Kylie Cosmetics and KKW Beauty come directly from Kylie and Kim, respectively) and the Kardashians were definitely not as involved in this project as they are in their current brands. Even without the lawsuits, Khroma likely wouldn’t have been a hit, anyway. I think the subsequent folding of Kardashian Beauty, which is what Khroma evolved into, proved that.”

For a little while, it seemed Kardashian Beauty was poised to become something of a hit, if not exactly the mega-disruptor brand we’d see from the family in the years that followed. “It was like an accessible drugstore brand,” recalls the source. “Serious beauty buffs weren’t interested in the line, and even though some of the products had cult-like followings, Kardashian Beauty didn’t have the industry respect that Kylie Cosmetics and KKW have now.”

There were some successes: Sales of the brands’ fake lashes spiked, along with Kim’s fame, when she married Kanye West in 2014. According to one estimate, sales for the specific pair Kim wore down the aisle jumped 48 percent in the days immediately following the nuptials. In 2015, Kardashian Beauty introduced a line of black-seed oil-based hair products, including a shampoo, conditioner, shimmery oil spray, mask and leave-in conditioner. They earned rave reviews from beauty editors and amassed legions of fans. That same year, Kardashian Beauty’s 3-in-1 Hairstyling Iron also earned a coveted Allure Best of Beauty Award.

“People are becoming their own experts and they’re driving different businesses, like the contour business,” said Allure Founding Editor (and then-Editor-in-Chief) Linda Wells at an event celebrating the Best of Beauty Awards. “To anyone in the industry, I think that came out of left field… but the Kardashians and all of their followers made that into a phenomenon.” In 2018, that quote and perspective speaks volumes. But Kardashian Beauty saw its share of difficulties, too.

In 2016, Khloé, Kourtney and Kim were named as defendants in a civil lawsuit brought by Hillair Capital Management. The firm claimed it put $10 million into the sisters’ Kardashian Beauty after the previous business partner, Boldface, began to struggle. Hillair bought out Boldface, but because the sisters were unhappy with the terms of the deal, they simply stopped promoting the brand publicly.

And because the value of an influencer brand is nil if said influencer doesn’t use their public platforms to, you know, influence, Hillair brought a suit against the sisters, aiming to win back its $10 million, plus the estimated cash the brand was projected to bring in had they been promoting it, up to $180 million. (Estée Lauder may have benefited from taking a look back at this example before it tapped Kendall Jenner as the face of its now-defunct millennial-targeted The Estée Edit without requiring her to put her own social promotional muscle behind it.)

“Kourtney, Kim and Khloé weren’t super invested in [Kardashian Beauty] personally, and were putting the Kardashian name on a lot of products at the time — this was around the time of their Kardashian clothing and shoe line at Macy’s, as well,” says the formerly Kardashian-employed source. “The family was basically a package deal. But with the rise of Instagram and social media influencers, I think the sisters realized the potential of individual projects. While they all had individual personalities and quirks on the show, social media gave them the opportunity to capitalize on those individual personalities and reach an exponentially bigger audience. From there, they had the opportunity to expand their personal brands beyond what viewers saw on TV.”

It was around this same time, with Kim and Kanye’s marriage gaining the couple fashion-world attention and Kendall beginning her modeling career, that the family’s status began to shift. “They were embraced by the high-fashion community. Personally, I think that was the turning point for the success of their individual projects,” explains the source. “The fact that Kendall was on the runway and Kim was on the cover of Vogue gave ‘serious’ beauty enthusiasts permission to embrace these product lines.”

Enter Kylie Cosmetics, which debuted in 2016, broke Google Analytics and showed the Kardashian sisters (not to mention the entire industry) what a truly lucrative, disruptive, smash-hit influencer beauty brand could look like. With Kylie’s first foray into the business realm, the family had a chance to get things right. Not only did Kylie maintain full creative control over her eponymous brand — and its earnings — but, by partnering with Seed Beauty, she also set up a business model in which her company could expediently produce inexpensive products with a shorter lead time.

“The Kardashian-Jenners are rich for a reason: They are very aware of where and how they spend money,” says the source. “I’m not sure what the profit margins are like on their products, but I will say they are very savvy businesswomen when it comes to pricing and profits.” Kylie Cosmetics’ revolutionary powers were derived from its seeming authenticity as an extension of Kylie, the person; its sense of urgency and immediacy that expertly plays into the cultural obsession with “drops”; and, of course, direct marketing via social media.

And it was Kylie’s success in the beauty business that prompted Kim to step up and leverage her own fame to build a respected brand in the category. “There is a healthy amount of competition between the sisters, especially Kim and Kylie,” says the anonymous source. “Kim has always been the most individually successful sister, and Kylie’s success threatens that. There is a lot of love between the sisters and any competition is totally healthy, but I do think that without Kylie Cosmetics, KKW Beauty wouldn’t exist in the way it does today.”

In an interview with Fashionista last November, Kim was quick to point out that she’d been dabbling in beauty long before Kylie, as well as to differentiate her own business from Kylie’s. “I love that Kylie started that with makeup, and I’m the first to do that in fragrance. It’s a whole new model and there’s so many possibilities, but it’s amazing when you can really go head-to-head with some major brands, just doing it our own way,” she said, adding that the pair “definitely discuss[es] business, and we talk about how we approach different things and how we love to do things.”

“The success of Kylie Cosmetics and KKW Beauty proves that the sisters’ involvement is crucial to the success of any project. Kourtney, Kim and Khloé weren’t super involved in Kardashian Beauty or their clothing line Kardashian Kollection, or even in their official apps — and all of those businesses suffered the consequences,” says the anonymous source. “It’s clear that when a Kardashian/Jenner sister is passionately and personally involved in a project — like with the show, Kylie Cosmetics, Good American or KKW Beauty — the business thrives. Consumers are savvy. They know when something is coming straight from the sisters, as opposed to when something is an empty marketing endeavor.”

Did Khroma Beauty and Kardashian Beauty need to fail so that Kylie Cosmetics and KKW Beauty could soar? That may be an oversimplification. But did the entire Jenner-Kardashian crew learn from their past experiences and legal struggles working with outside licensing firms? Absolutely. And did they channel those learnings into building the industry-dominating companies we know today? All signs point to hell, yes. In that way, Khroma Beauty lives on, despite the fact that very few people even remember it ever existing in the first place. No one ever accused the Kardashians of being incapable of reinventing themselves.

How Celebrities Ruled the Beauty Industry in 2017

Kim Kardashian is launching her own beauty brand

Will Rose McGowan be the latest star to make a move on the beauty industry?